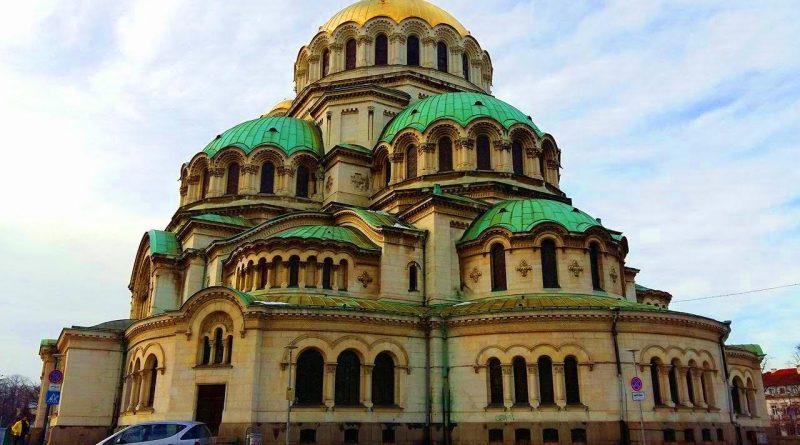 Located south of Romania, my country, Bulgaria is a lovely European country. It is, in fact, the first one I’ve visited – I went for a short trip in Veliko Tarnovo:D.

Today I’m inviting you to learn a thing or two about this country as Bilyana, travel blogger at Owl Over The World, shares 45 facts about Bulgaria.

I have to say: many of them were new to me – so make sure you read all these interesting/fun things about this country, and don’t forget: I have more travel curiosities and quirky things for you on the blog!

Bulgaria is a beautiful country with amazing nature, lovely villages, friendly people, delicious food, and it’s extremely affordable. The country has a rich history and well-preserved traditions. However, many people haven’t even heard about Bulgaria although they should.

Here are 45 facts about Bulgaria – a wonderful country. 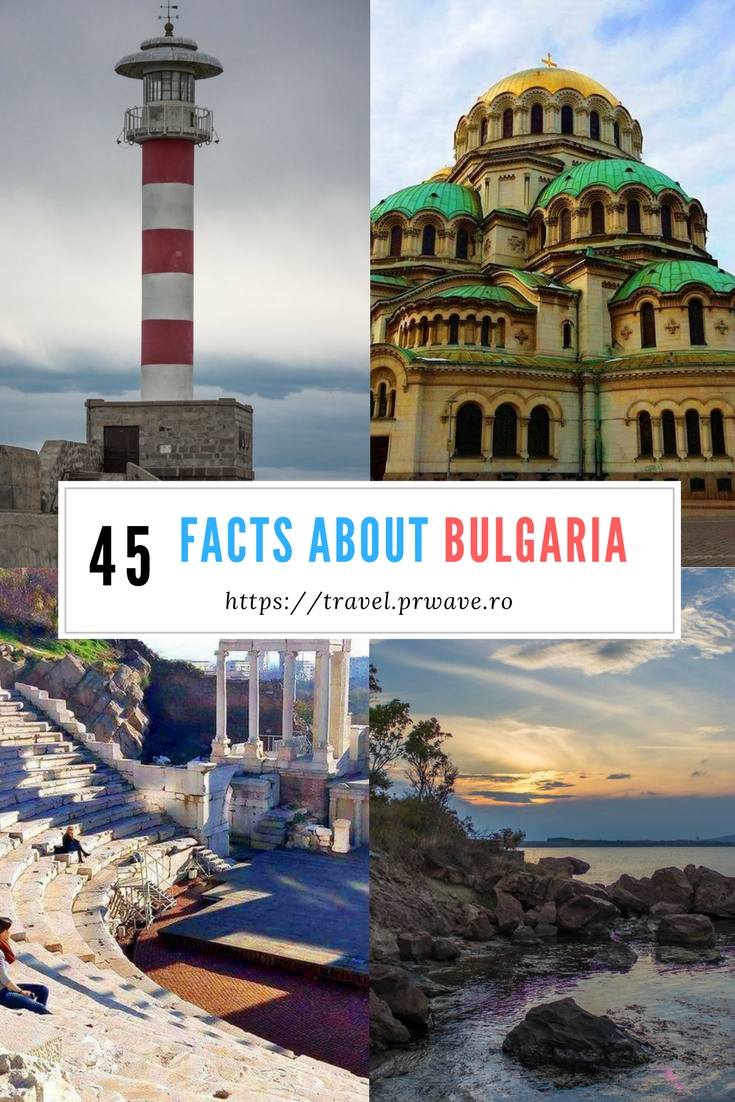 1.       Bulgaria is one of the oldest European countries established in 681 AD.

3.       Bulgaria ranks third in Europe for the number of its valuable archeological monuments after Italy and Greece.

4.       Alexander Nevski is the oldest autocephalous Slavic orthodox church in the world.

5.       The Bulgarian army has never lost a single flag in battle.

6.       The Cyrillic alphabet was invented by two Bulgarian monks – Cyril and Methodius back in 9th century.

7.       The Cyrillic alphabet became the third official alphabet of the EU after the accession of Bulgaria to the EU on January 1, 2007.

9.       The ancient Bulgarian calendar was declared as the most accurate in the world by UNESCO in 1976.

READ  The impressive organ at the Royal Chapel, Versailles, France

11.   Bulgarians are smart. The country takes second place in the world in international IQ tests and SAT scores.

12.   Bulgaria is fourth in the world in per capita university education.

13.   The Bulgarian folk song “Izlel e Delyu Haydutin” was sent in space on the board of the US Space Probe Voyager I.

14.   Almost one-third of Bulgaria is cover in forests.

15.   The Bulgarian Air Force developed the first air-dropped bomb in military history. That was during the First Balkan War, the bomb was used on 16 October 1912.

16.   The first woman in the world who participated in a military flight was the Bulgarian Rayna Kasabova.

17.   The highest peak on the Balkan Peninsula is Musala peak. It’s located in Rila Mountain, Bulgaria, rising at 2925m above the sea level.

18.   Bulgaria was the home of the Thracians, the certain hero called Spartacus was born in Bulgaria.

19.   Bulgaria produced as much as 85% of the world’s rose oil. The roses are grown in Bulgaria’s Rose Valley (Kazanlak) are an essential ingredient in perfumes production.

20.   The bagpipe (known as ‘’gaida’’ in Bulgaria)  is a traditional Bulgarian instrument. The other nations that use the bagpipe as an instrument are Ireland and Scotland.

21.  Bulgarian yogurt is the best in the world, trust me. The Lactobacillus bulgaricus, which gives the unique taste of yogurt can be found only in Bulgaria.

22.   Bulgaria is the second country in Europe with the highest number of natural mineral springs. Bulgaria is heaven for SPA.

23.   Bulgarians nod for no and shake their heads for yes.

24.   ‘’Name Days’’ are celebrated in addition to birthdays and even more valued by some people.

25.   Bulgarian welcome the spring with Baba Marta. Every year on 1 March Bulgarian give a Martenitsa ( white and red bracelets) to each of their friends to congratulate them on the beginning of the spring and for health. The Martenitsa is wearing until you see a stork or a blossoming tree.

27.   Bulgarian celebrating Trifon Zarezan instead of Valentine’s Day. 14 February is a Wine-growers Day and people celebrate the love for wine.

29.   The first electronic computer was invented by John Vincent Atanasoff who has a Bulgarian origin.

30.   Mark Zuckerberg, the creator of Facebook also has a Bulgarian origin. He is named after his Bulgarian grandfather – Marko, who emigrated from Bulgaria in 1940.

32.   The Bulgarian Dan Kolov is the first wrestler in the world with 1500 wins and 2 lost matches.

33.   For 29 years so far no woman has managed to beat the record of the Bulgarian Stefka Kostadinova for the high jump of the World Championships in Rome with sensational 2.09 meters.

34.    Bulgaria is one of the biggest wine exporting countries in the world. Wine production has a long history dating back to Thracian times.

35.   Bulgaria ranks third in Europe in biodiversity, with a number of rare and endemic species.

36.   The Bulgarian flag consists three colors: white, green and red, laid horizontally from top to bottom. The white is a symbol of hope, the green is a symbol for the wonderful nature, and the red is a symbol of the blood soaked into our lands.

37.   For more than 700 years, Bulgaria was twice its current size, reaching three seas – the Aegean, Adriatic and Black sea.

41.   Bulgaria has one of the fastest internets in Europe.

42.   Sofia is one of the most affordable European capitals to visit.

43.   Bulgarian women have been ranked among the most beautiful in the world. (lucky mans)

45.   Sofia, the capital of Bulgaria is situated just 15 minutes away from Vitosha Mountain.

Bulgaria is great country absolutely worth visiting and all these facts are reasons to book your trip ASAP.

Bilyana is a travel blogger, mountain lover, and full-time dream chaser. She follows her dreams and wants you to do the same. Her goal is to help you to travel more & worry less and inspire you to get out of your comfort zone and see this beautiful world we live in one adventure at a time. You can follow her adventures on her blog, Instagram, Pinterest and Facebook. 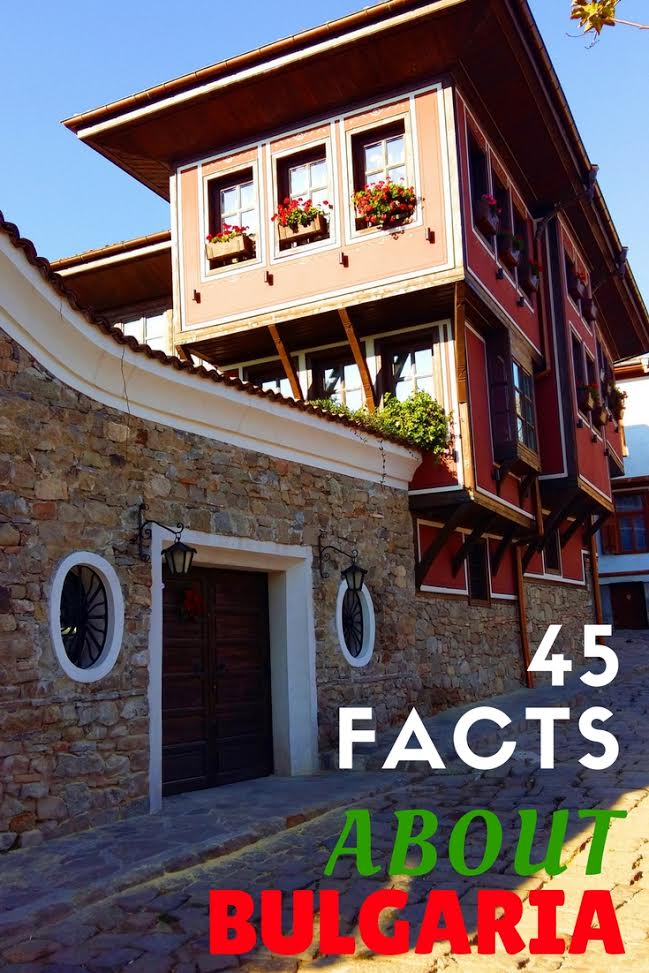 first pin made with 2 photos from Pixabay: 1, 2