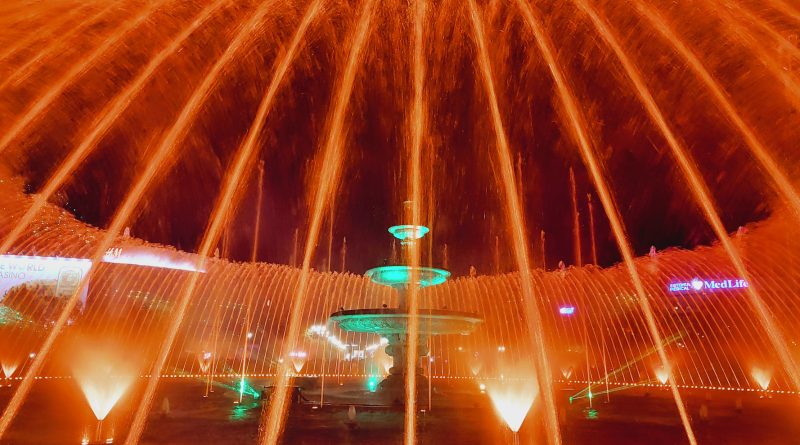 One of the best things to do in Bucharest is to visit the Union Square fountains.

Bonus: from May to the beginning of October (depending on the weather) you can enjoy a special Unirii Square fountain musical show. The show is called Water Symphony – Simfonia Apei in Romanian.

Find out everything you need to know about the Piata Unirii fountain show from this article. 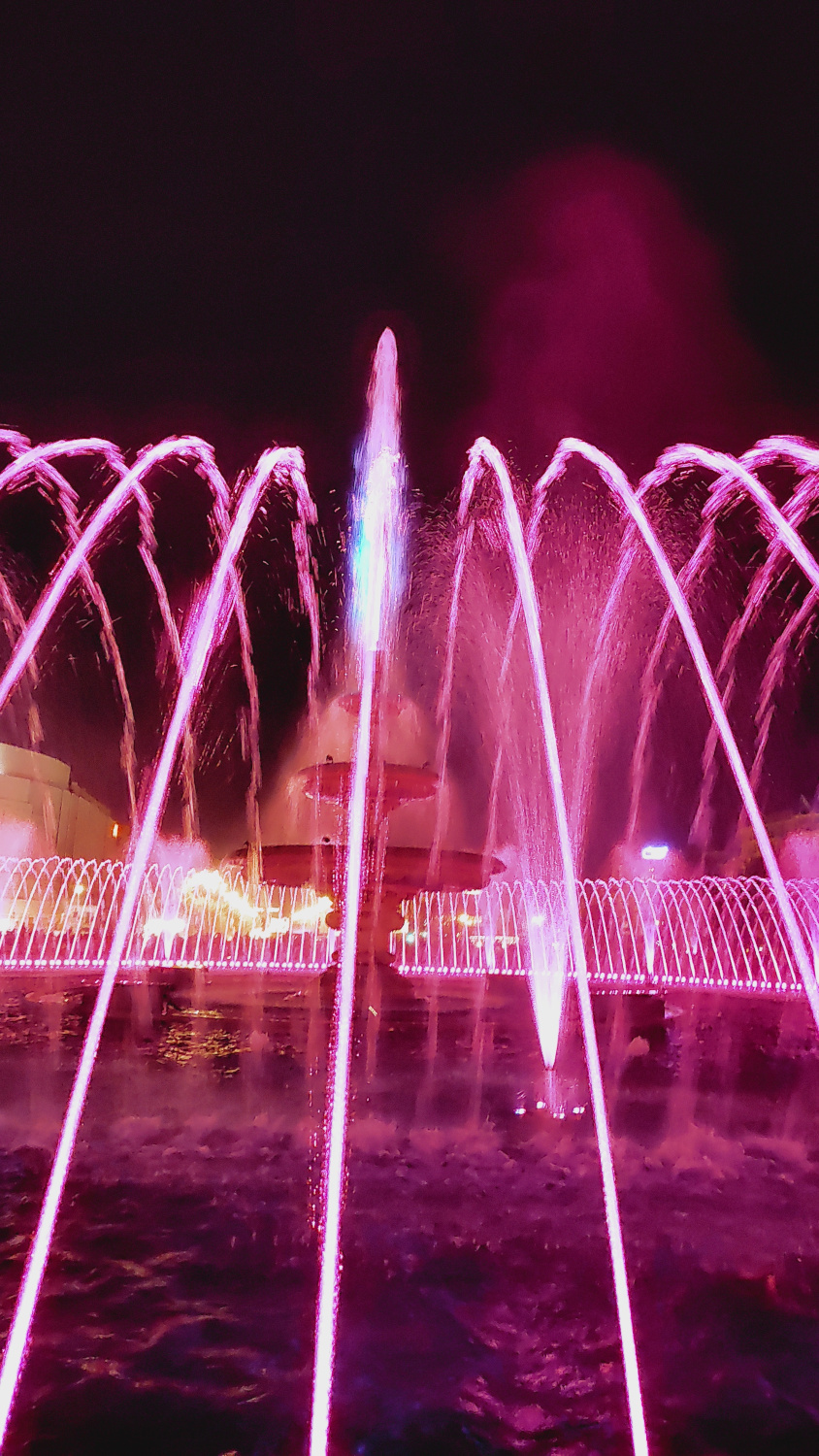 Built in the 1980s, the fountains were partially re-build and modernised in 2018 by Apa Nova, the company that manages Bucharest’s water and sewage system. The cost of the modernisation was around 7 million Euro.

There are 44 fountains spread over a 1.4 km distance, between (Constitutiei) Constitution Square and Alba Iulia Square.

In Constitution Square, you can see the Palace of the Parliament, the largest administrative building in the world and second largest building worldwide. 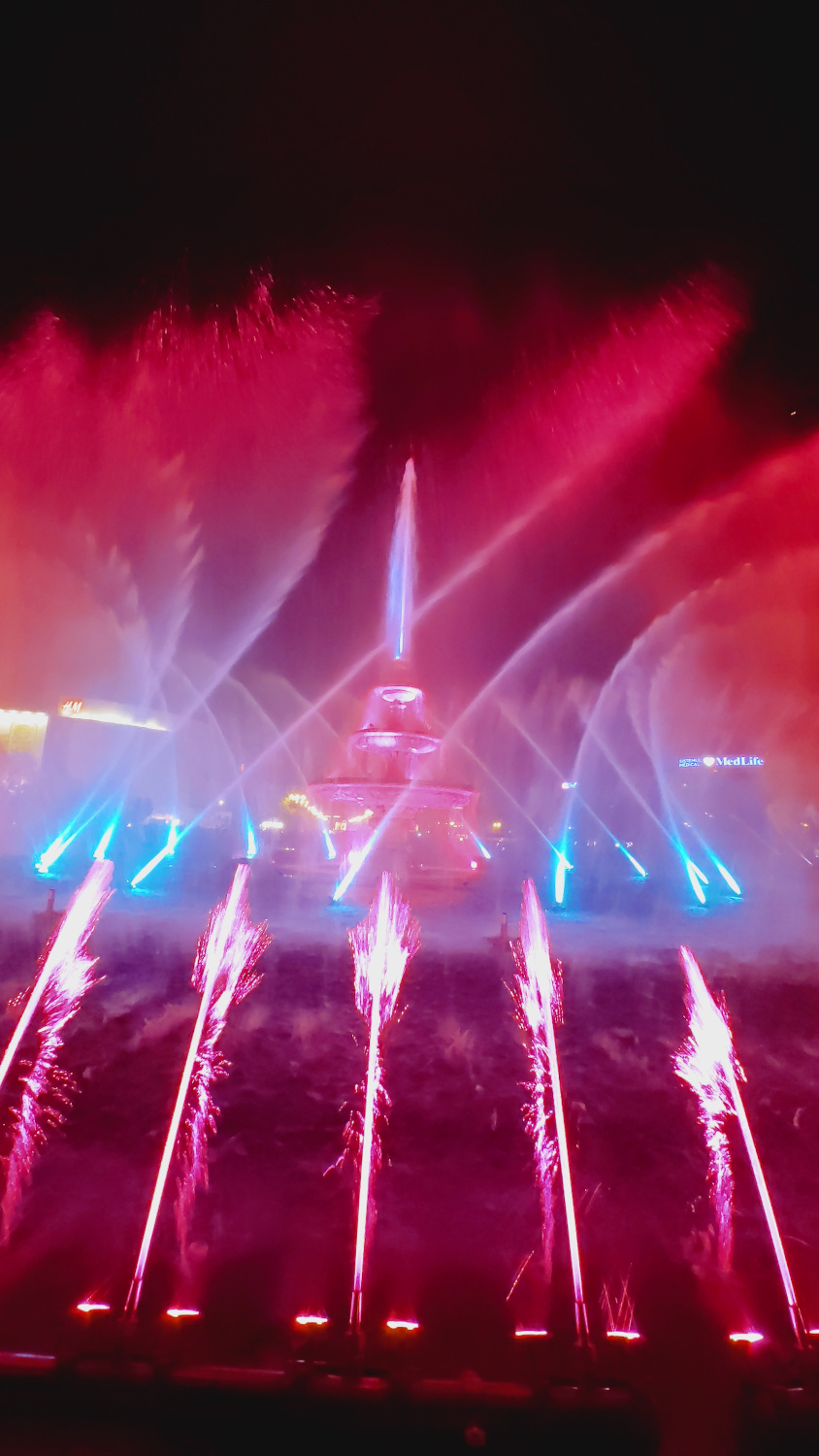 The center is at Union Square – Piata Unirii and this is the place to be for the musical show as the singing fountains in Bucharest are unmissable when visiting Romania’s capital.

An important thing to mention is that the fountains have state-of-the-art equipment and technology. In fact, when they were modernised, some of them were unique in Europe.

Each fountain can be controlled individually and every show is completely automated. 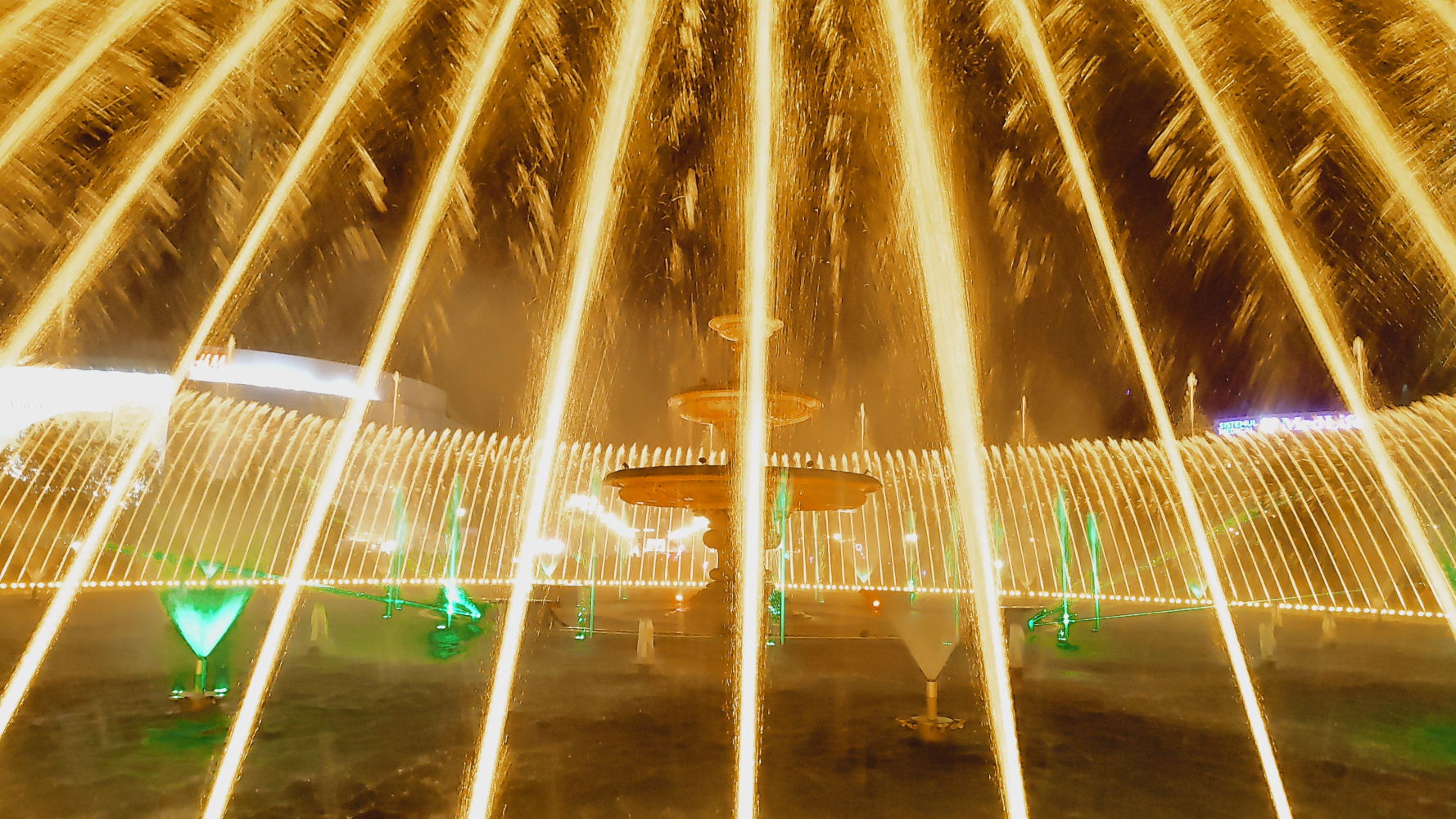 The most important thing to know is that you can see the fountains both during the day, and during the night, from May to early October.

Some of them might be stopped on days with extreme weather (storms or windy days), but in general, they’ll run. 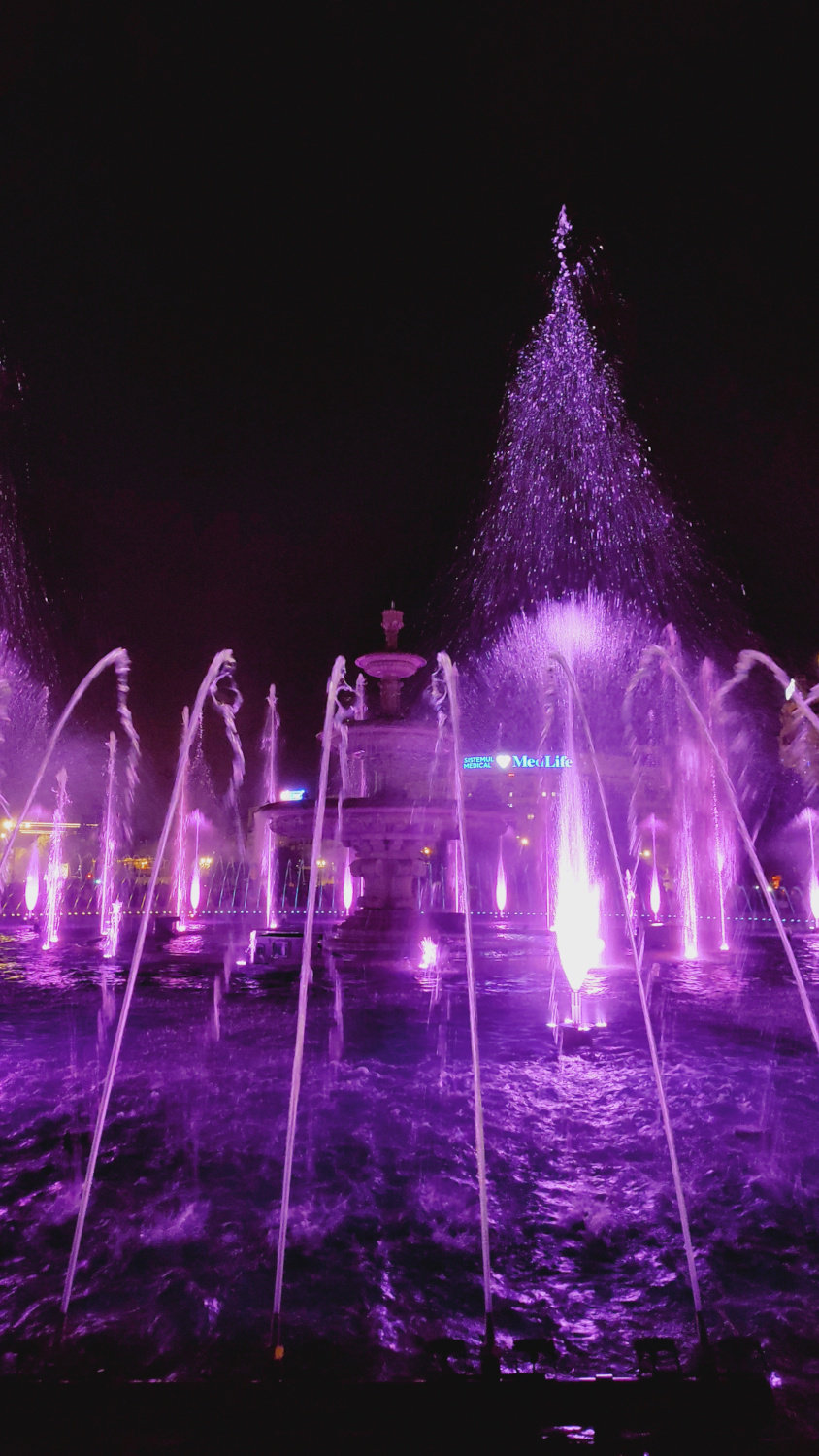 Also, you can see them in colours ALL week – not during the weekend.

What you won’t see is the special musical show!

How to get to the Union Square fountain in Bucharest

The musical fountains in Bucharest are easily accessible. You can get there by metro – Union Square station.
There are also buses and trams that will allow you to get close to the fountains – buses 385, 104, 117, tram 32, 27, 7.

This is the public transport site with all the means of transport reaching Union Square https://www.stbsa.ro/statii. As a note, Str. Halelor, Bd. Regina Maria, and Bd. Corneliu Coposu are the closest to the fountains. The other one isn’t far – 4-5 minute walk.

How to see the Bucharest fountains musical show: Water Symphony

Each weekend night – Friday, Saturday, and Sunday – there is a 45-minute musical show at the Union Square fountains in Bucharest.

There is one show per evening!

The schedule varies! So, in May and September/October, the show takes place at 8PM (20:00).

The best advice: check here https://www.facebook.com/SimfoniaApei/ the hour of the musical show (it’s a Facebook page in Romanian, official, and created especially for the fountains show. However, you can use Google translate or something similar to see at what time the show starts when you’re in Bucharest and want to see the Water Symphony.)

See also  Hotels in Swindon for Your Stay

Insider tip: there are different shows each weekend day. This means that the show on Friday has one theme, the one on Saturday another, and the one from Sunday differs.

For instance, in 2022, on Saturday the theme was focused on national values and music, while the theme for Sunday was Peace. 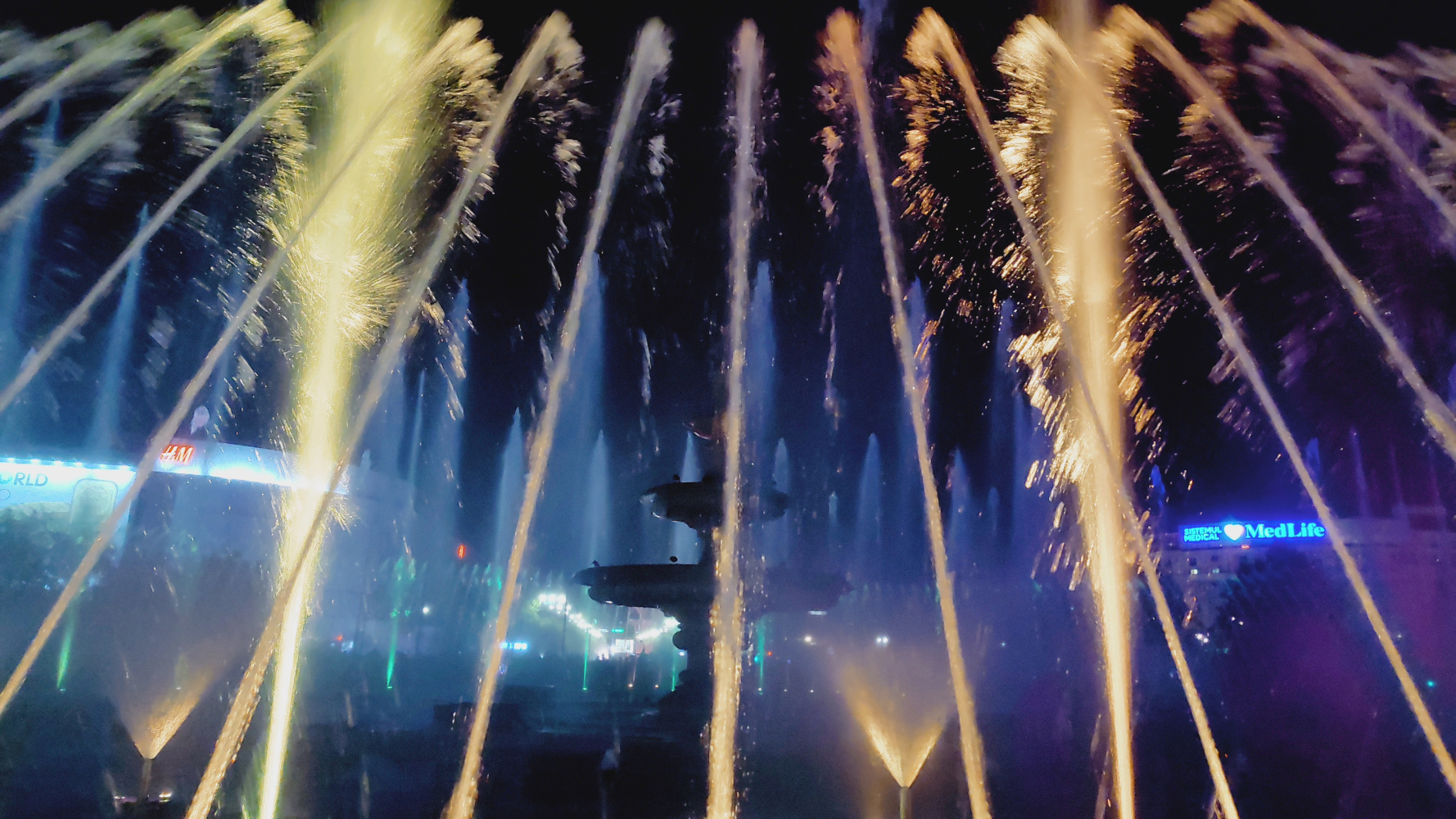 Be there at least 30 minutes in advance if you’re traveling by car. You will need to look for a place to park your car, which will take a while.

We often leave the car between Piata Constitutiei – Constitution Square (where you can see the People’s House – Palace of the Parliament) and Piata Unirii (Union Square).

There is another parking available at the Unirii (Union) shopping mall. In fact, there are two parking areas here: one is next to the shopping mall, outside, and the other one is behind the mall, and has six stories. 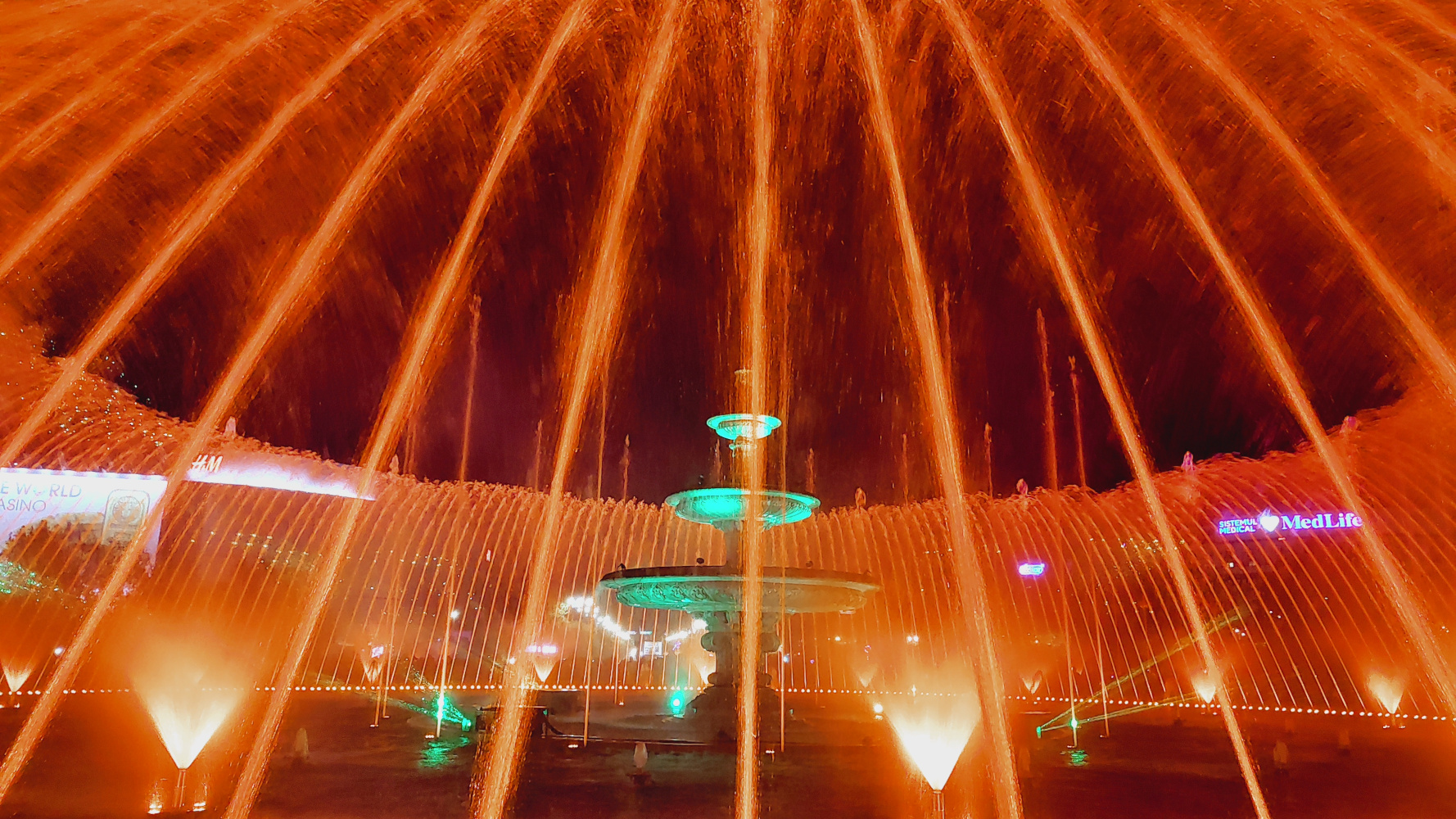 Make sure you find your way next to the Central fountain, the big one, as that will be the centre of the show.

Be aware that if you stand too close to the margin, you may get wet while admiring this impressive Piata Unirii multimedia fountain show. However, this doesn’t stop people from enjoying the show from the margin of the fountains. We also saw some parents bringing rain cover or jackets for the kids. No umbrella, please! 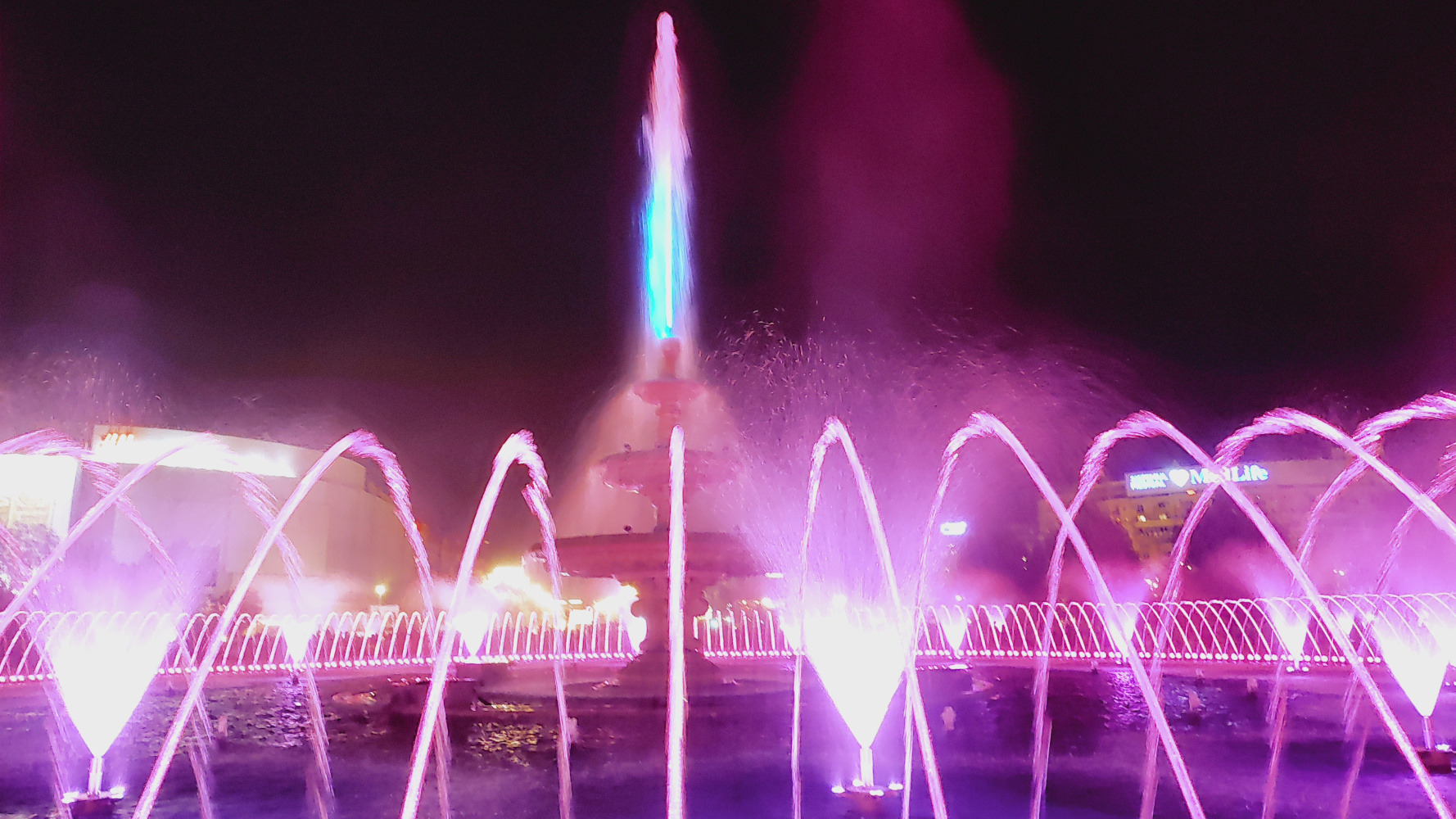 Enter the street ONLY after the auto traffic is closed! It’s usually done between 30 and 10 minutes before the show. You’ll see that the cars will be blocked – and there will be police cars to ensure the traffic is done smoothly and that the area around the big fountain becomes pedestrian-only.

After the show, if you’re hungry, you can eat a bagel or a slice of pizza at one of the kiosks from the Union Square. There are also restaurants in the area. 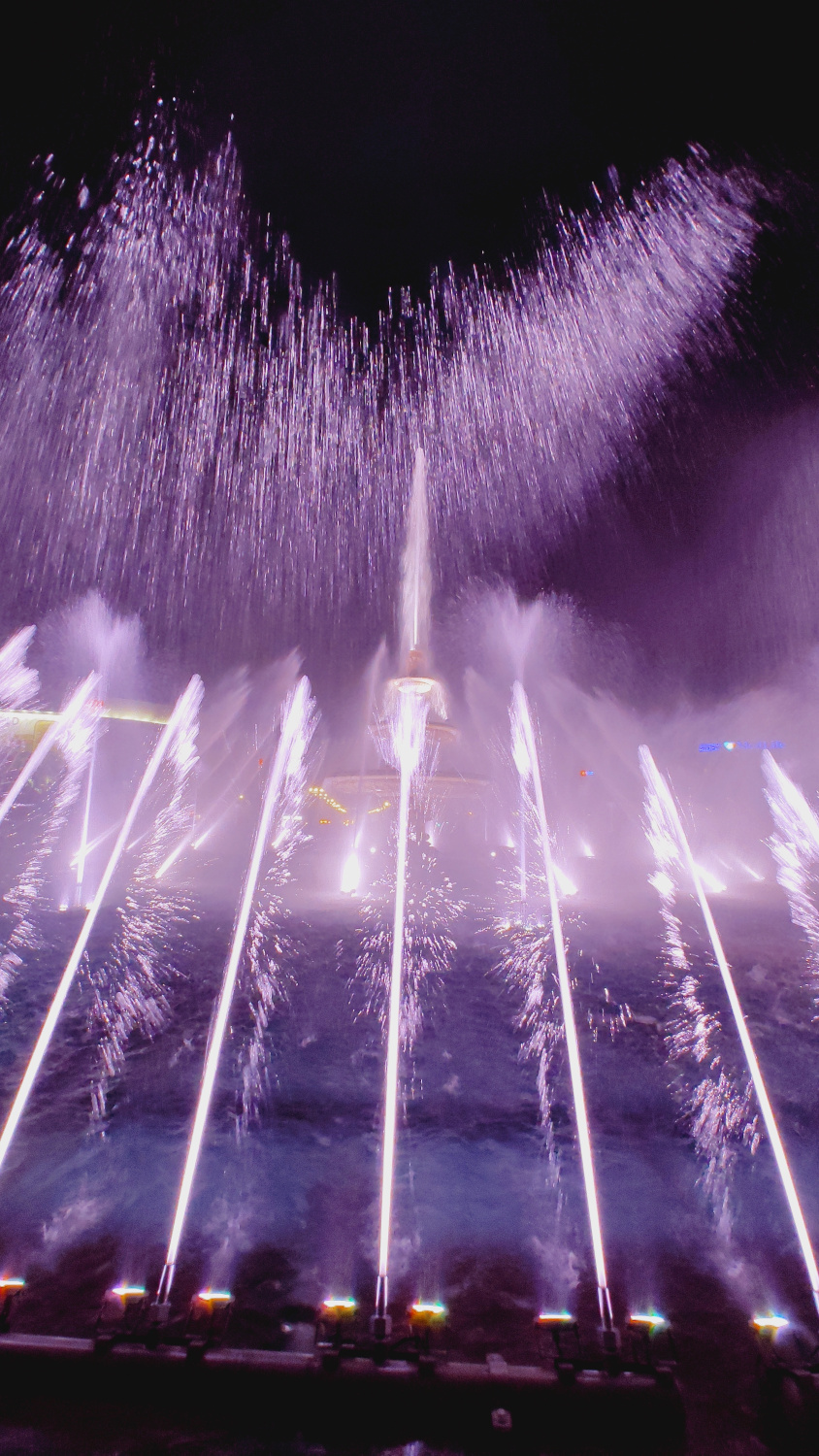 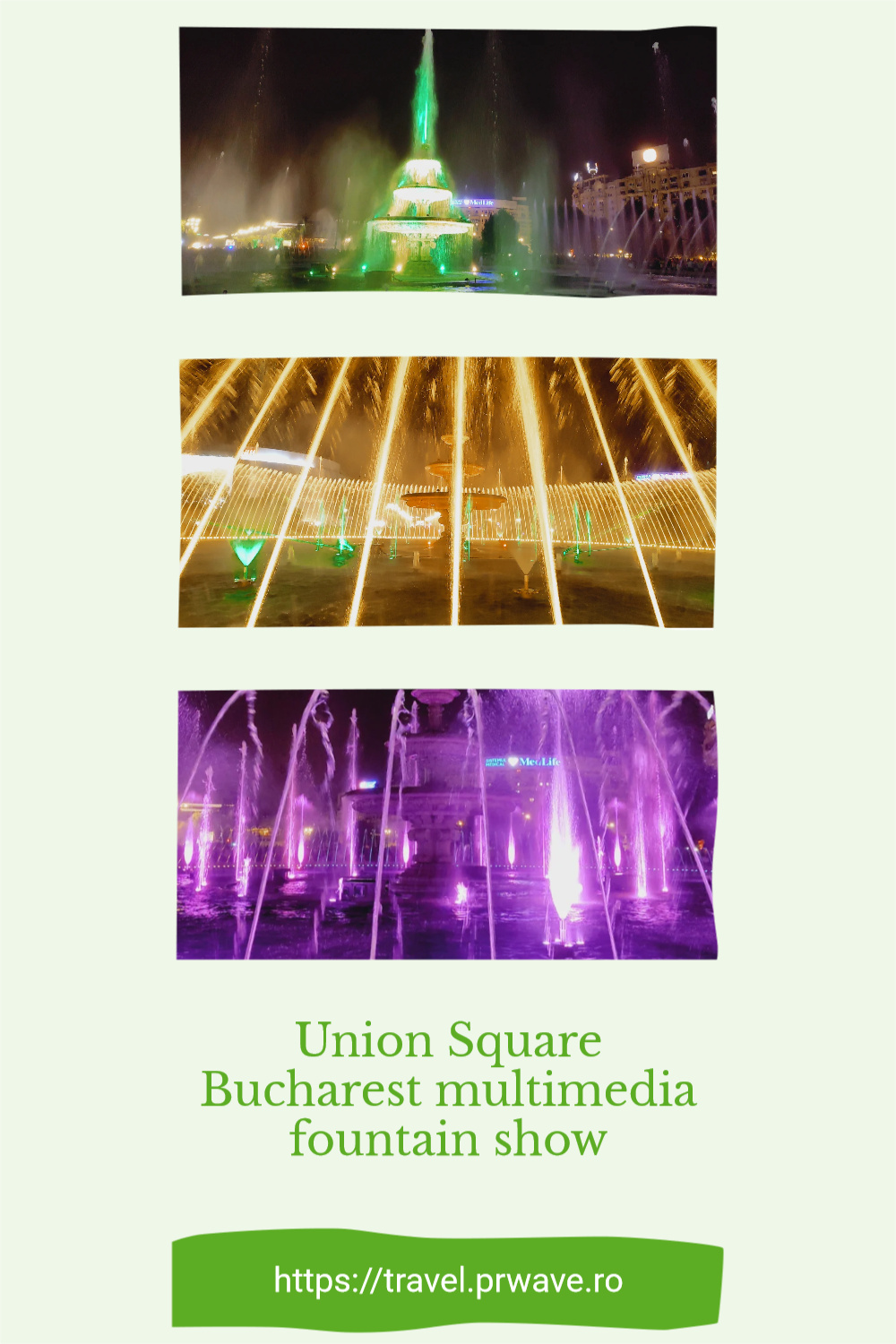 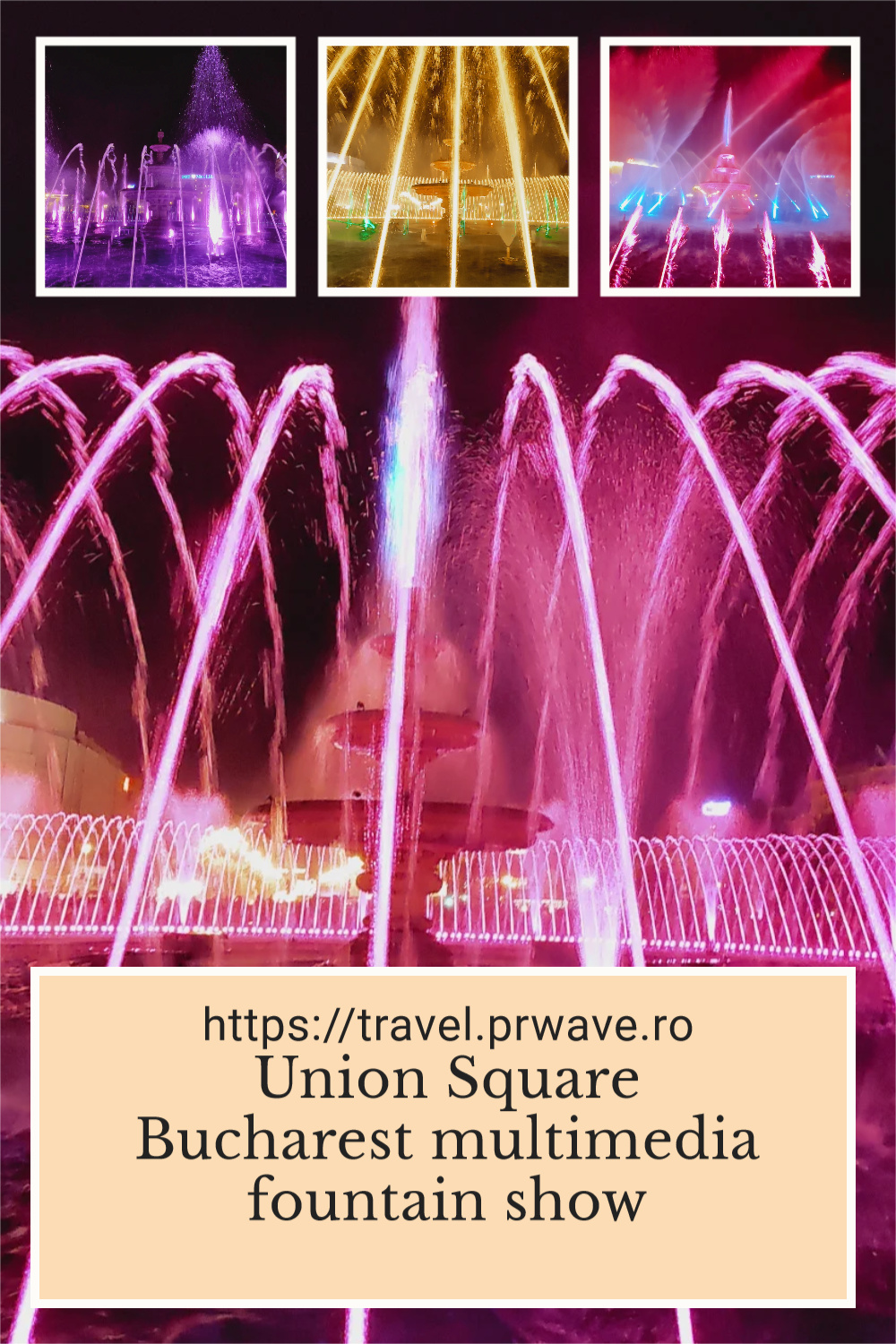 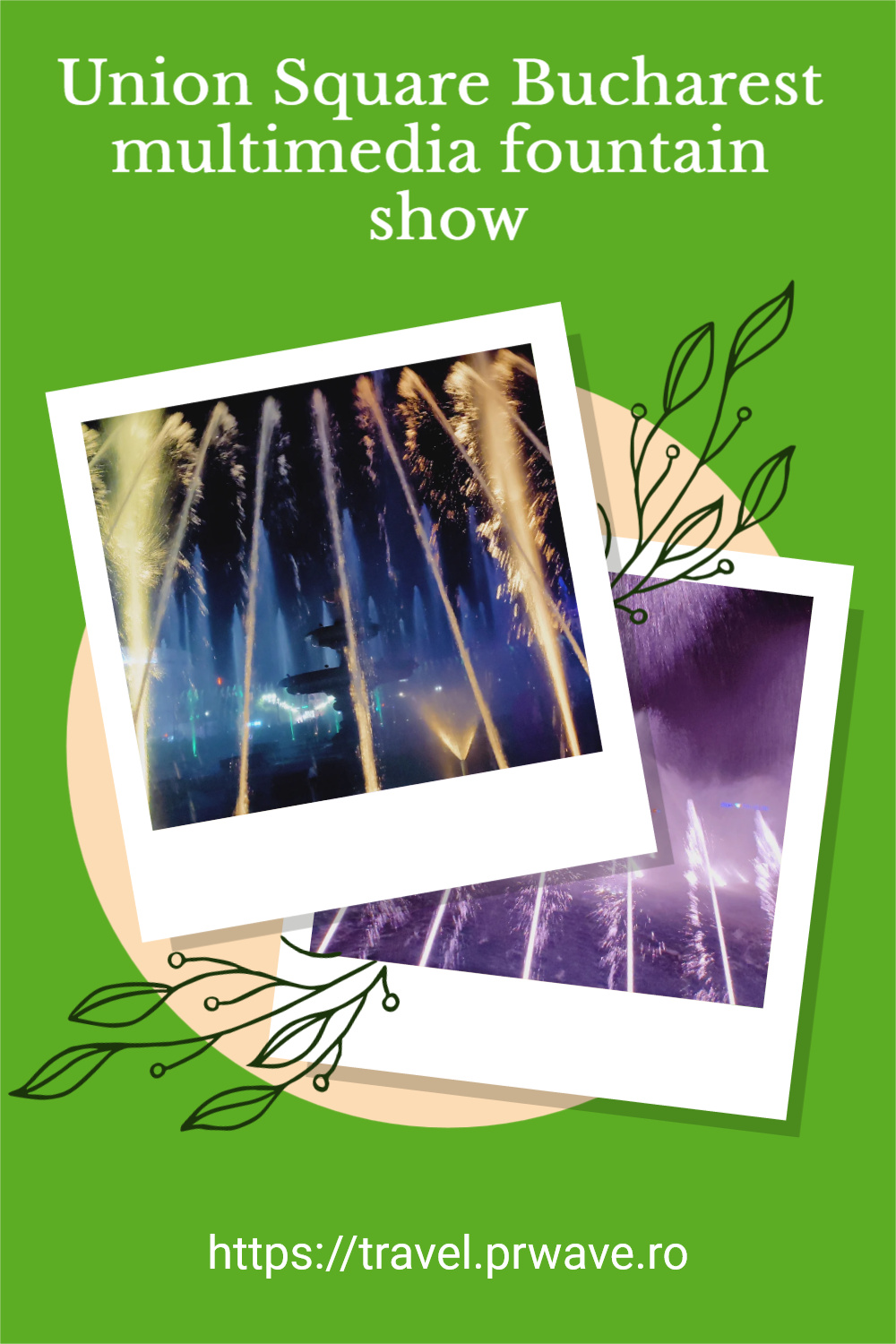 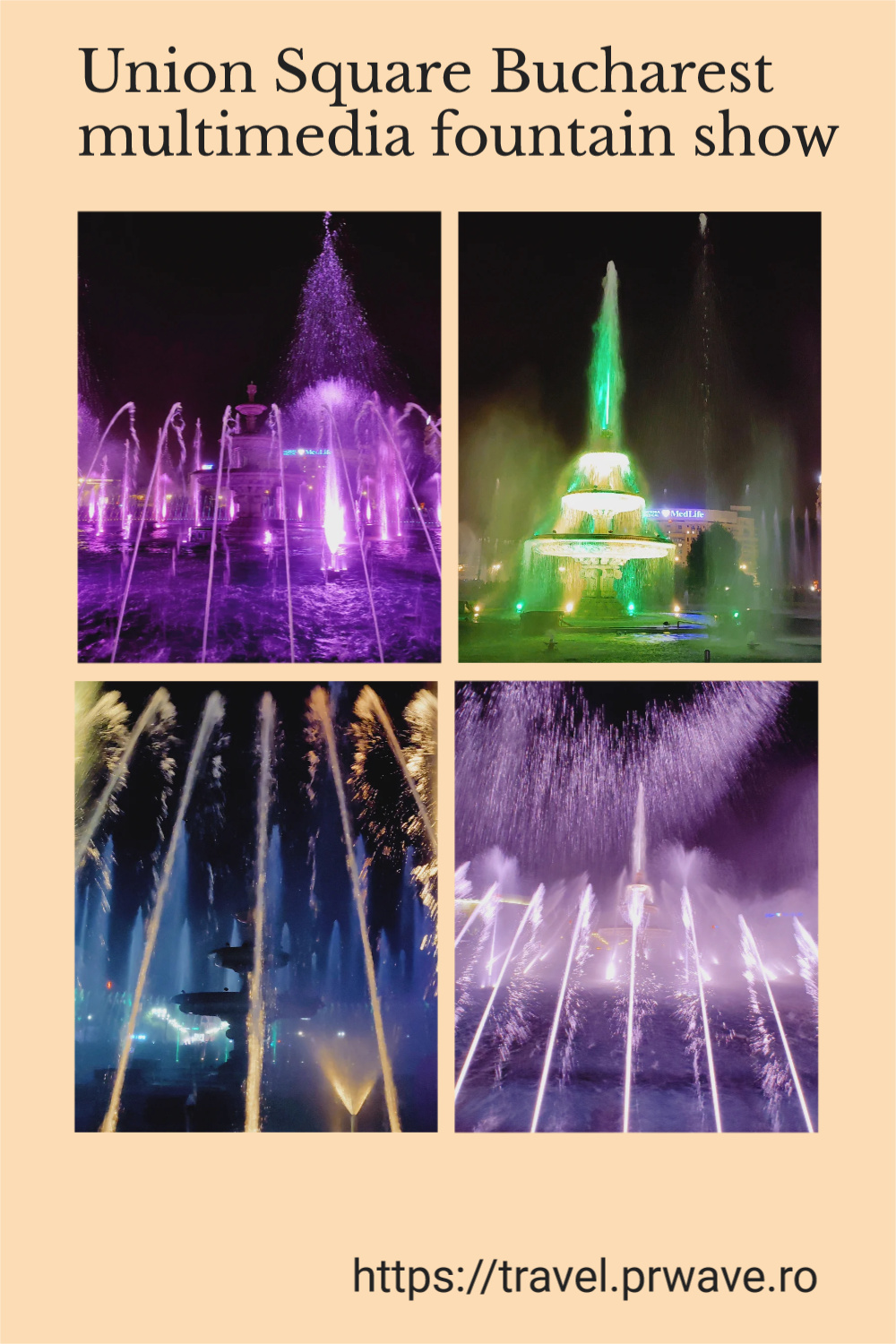