1.   In the years immediately before the French Revolution, the Palais Royal – nowadays the epitome of bourgeois calm and good taste – was the mother of all open air brothels.

2.   Marie Antoinette was so unfamiliar with Paris that on the night she was to meet her husband, King Louis XVI, at a designated street corner so they could flee the country together, she promptly lost her way as soon as she stepped out of the Louvre. The resulting delay was possibly instrumental in the plan’s ultimate failure. 3.   Street signs only became common in 1805. (Porcelain plaques with red letters for streets that ran parallel to the Seine, black for those that ran away from it.) The first reliable city maps date from the middle of the 19th  century. Until then, foreigners were advised to “climb one of the monuments to get a better understanding of the city as a whole”.

4.   Alexandre Dumas’s The Count of Monte Christo is based on real events. Dumas was inspired by a book of stories from the archives of the Parisian police, written by the archivist Jacques Peuchet in 1838.

6.   After the defeat of the Commune de Paris, the Parc Monceau was closed to the public for several days while members of the Commune were summarily executed. In the Jardin du Luxembourg, bodies of communards were dumped in the shrubberies and the ornamental lake.

See also  Historical facts you need to know about Boston 7.   The area of today’s Gare St Lazare was once (in the early 19th century) the city’s most notorious no-go-area slum, bordering on the municipal waste dump. 8.   Emile Zola, the great advocate of science and rationalism, was afraid that the Eiffel Tower would alter the weather and attract thunderstorms to Paris. 9.    Adolf Hitler is said to have found the Sacre Coeur Basilica “appalling”, but liked the Eiffel Tower and the Opera (“the most beautiful theatre in the world”). A newspaper boy who had run towards the Fuehrer’s black sedan, expecting no doubt to find customers inside: politicians, perhaps, or wealthy businessmen, screamed when he recognized whom he was actually facing and ran away, dropping his papers on the pavement. 10. “Genuine” cobblestones used as weapons (projectiles) in the 1968 riots can be purchased at  ebay for between 10 and 50 Euros. 11. The Centre Pompidou was built in the 1970s on a brownfield site – actually a car park – to rejuvenate a quarter which had fallen on hard times. The area called Beaubourg, the city’s red light district in the Middle Ages, had once been rich in streets with rude names: Rue due Poil au Cul (Hairy Bottom Street), Rue Troussevache (Cowfucker Street), Rue Tire-Vit (Cockpuller Street).

12. In 1925, Le Corbusier submitted a plan that foresaw razing the entire Right Bank – from the Louvre to Montmartre – to the ground, replacing its “tubercular” buildings with 18 cruciform towers.

13. The Haussmann style of buildings dates back to the Prefect’s 1855 circular where he decreed that all new buildings in the same block had to feature continuous balconies, identical cornices and roofs. The style of narrow ledges and iron railings at the foot of each window is associated with Haussmann’s predecessor as Prefect of Paris, Count Rambuteau.

Source: Parisians – An Adventure History of Paris written by Graham Robb (Author of The Discovery of France)

About ParisBuff: Michael Schuermann is author of Paris Movie Walks and form half of @ParisBuFF. He’s now moved on to start a blog on hiking. You can follow his posts at Easy Hiker 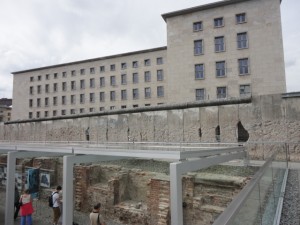 The Rise and Fall of the Berlin Wall

Berlin: The German Chancellery ends in a spectacular way