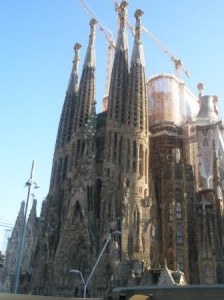 “The intimacy combined with the spaciousness is that of a forest, which will be the interior of the church”. (Antonio Gaudi)

I stand still, mesmerized by La Sagrada Familia, or the forest temple with its numerous towers decorated with flower and fruit symbols portraying the four seasons. Indeed, here I am in front of what is going to be the tallest church in the world (170 m), ready to welcome 8000 believers. In 2026, the Catalans will celebrate 100 years from the death of the one and only Gaudi, and his masterpiece La Sagrada Familia, part of UNESCO heritage and the landmark of Catalonia, will finally be completed. Initially conceived by the architect Francisco del Paula del Villar in 1882, the project was taken over by Antonio Gaudi a year and a half later. It is no wonder that Master Gaudi left his unique finger print on the church. His surrealistic style, considered by some an anti art-nouveau manifesto or by others belonging to art-nouveau itself is strongly inspired by nature and faith.

My very first reaction is to stay speechless, stunned by the impressive exterior. I fly away on the wings of a dream as I reflect upon the journey that the temple proposes: an iconic religious lesson with three façades that depict the destiny of Jesus and mankind. The first façade represents the Birth of Jesus Christ and it bears most of Gaudi’s influence. It is the symbol of joy and celebration, bringing together natural elements: a turtle (eternal sea), a tortoise (eternal earth), a chameleon (change), the three virtues (Hope, Faith and Charity) and the Tree of Life. The Passion façade pictures the Death of Jesus Christ, a moment of mourning and sadness. It is plain, harsh, a symbol of sins, sacrifice and pain, even brutality directed by Josep Maria Subirachs and it includes scenes like the Last Supper, the Trial, and the Crucifixion, the Resurrection and Ascension of a Bronze Christ. The Glory façade which is to be completed will show the beginning and end of Man, the hope of redemption and the afterlife (Heaven, Hell and Purgatory). It will have inscribed on its doors “Pater noster” in Catalan and “Give us this day our daily bread” in fifty languages. The 12 spires of the apostles will be completed with other four dedicated to the Evangelists together with one for Virgin Mary and the tallest one for Jesus. The entrance will be a “Hell road” starting from Carrer Mallorca decorated with devils and monsters. Up from my dream, I enter the magnificent building and I am dragged in a second vision by the strangest atmosphere I have ever experienced. I hear a bizarre music like the sound of a forest by night that gives me shivers on my spine. The tiles from the central vault and the side aisles impregnate it with the glows of the woods when a ray of sun barely enters through the thick crowns of leaves. Four monster drawings in form of a bull, a lion, an eagle, and an angel (the four evangelists) threaten me in the middle. The altar is dominated by a minimalistic crucified Christ which appears to have lost His human nature. There is no flat surface and all shapes change from square to circle in a myriad of variations. I stay long in my dream catching a glimpse of what Eternity might look like. On my way out, waken up from this journey, I conclude: mixing different styles from Gothic to late Gothic, cubism, surrealist, art-nouveau or baroque, La Sagrada Familia is an unparalleled temple. I stay with the impression that I have been in a magical world where no shape is what is seems to be, where appearance is illusion and reality is just beyond itself, where only imagination can hear the message of the supreme Artist.

Gaudi said: “My Client is not in a hurry”. Indeed, the architect died before having admired his chef d’oeuvre. Nevertheless I am convinced that from Heaven he sees it and he is proud of it.

This article is part of a series on Barcelona. You can also read a presentation of Barcelona Nocturna.

READ  Places I'd love to visit in Iceland

Photo of the week: Flower-Man in Barcelona, Spain

Mallorca and its beautiful West Coast