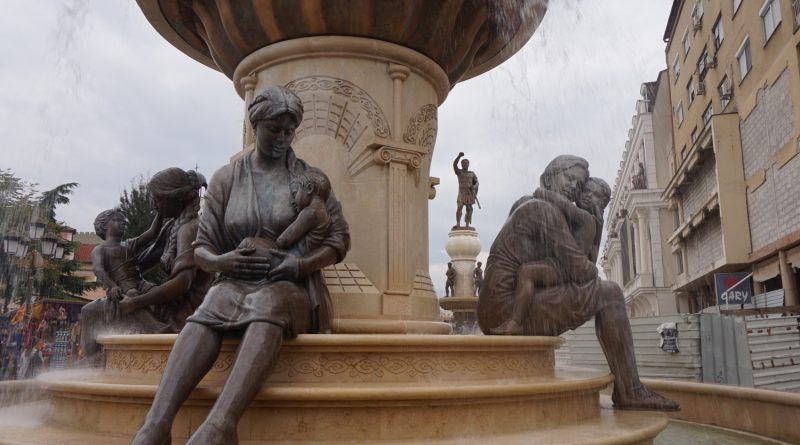 If you are a fan of unusual, interesting attractions, then you should consider a trip to the Balkans. You won’t be disappointed. Check out this comprehensive list with the top quirky sights to see in the Balkans compiled by Rohan from Travels of a Bookpacker. For other interesting places to see, check out our section with curiosities from across the globe where you will find all sort of unusual attractions worldwide. 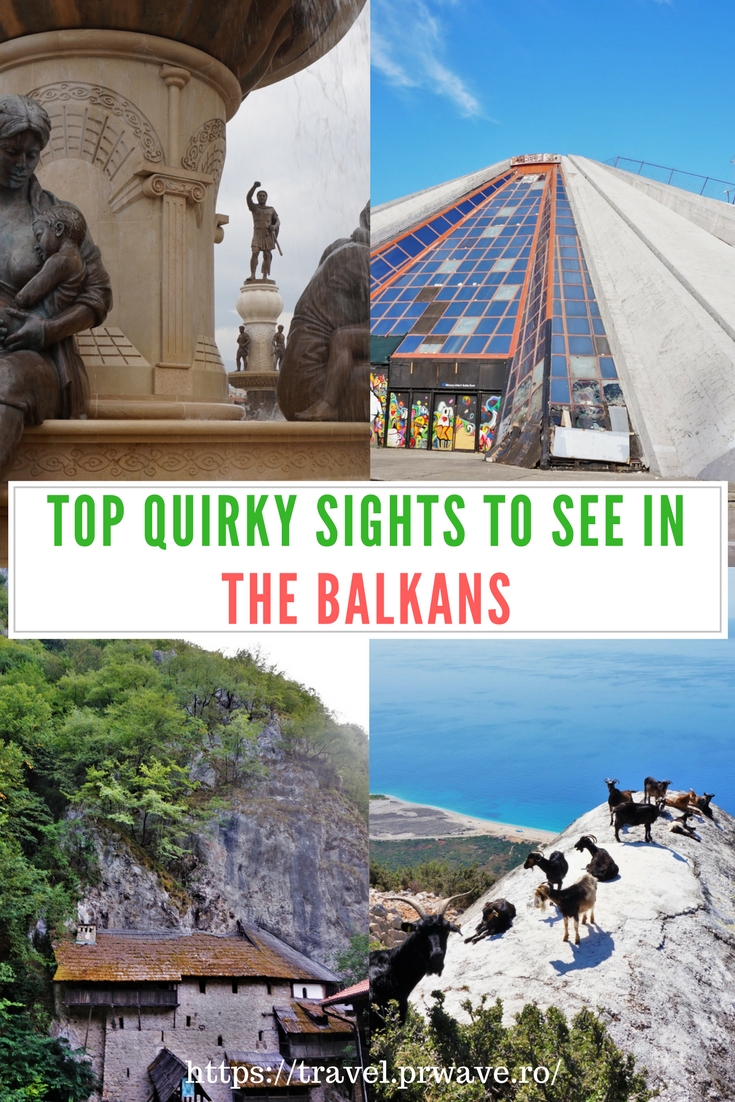 The Balkans are an incredibly intriguing region stretching from Slovenia all the way to Greece it is home to some amazing nature, friendly locals and a hugely complex history. The recent past involving communism, several wars and territorial disputes mixed with the history of the Austro-Hungarian and Ottoman empires makes for a huge melting pot cultures, traditions, languages and ideas. It also makes for very unique architecture, stories and some downright weird places to visit.

On a recent three-month road trip of the Balkans we came across some of these impressive, crazy and obscure spectacles and really enjoyed the refreshing break from museums and churches that seem to top the ‘to-do’ lists of most countries. So here are the top quirky sights to visit in the Balkans.

Dotted all over the country are over 170,000 concrete bunkers. These are left over from the time of dictator Enver Hohxa who was paranoid of attack from a number of directions. Now these bunkers are just wasting away so the Albanian people are beginning to think of creative ways to use them. In Tirana two of them have been turned into museums and there are others that have been used as cafes and even accommodation.

This was once named the ugliest building in the world and you can see why. But it’s curious shape could be viewed as kind of funky and it definitely makes a good tourist attraction. It’s free to go inside and there are a few exhibits but the main attraction is the weird-looking exterior. It’s said that the 99 domes are meant to represent the plisi, a traditional Albanian hat.

READ  The Cenote at Chichen Itza

This quirky structure is an abandoned meeting house of the Bulgarian Communist Party. It sits atop the mountain looking out over the country but today there is not a lot there except some curious tourists. The building is very impressive to see and on a clear day the views are amazing. Entering the building is technically illegal but it’s not policed. All of the entrances are periodically closed up but people always create an alternative entrance. It’s about a three-hour drive from Sofia or two hours from Plovdiv.

In 1984 Sarajevo hosted the Winter Olympics. In 1992 the city descended into war and the bobsled track was forgotten. It is surprisingly mostly intact and covered with street art. You can take a taxi up from the city and walk along the entire track. There are plans to rebuild the track and some locals have begun using it for bobsledding again. It’s definitely something different to the usual museums and churches.

Smack in the centre of Tirana is a huge, glass pyramid that is completely empty. It’s one of the top things to do in Tirana and nobody really knows what it’s for. It was built as a museum for dictator Hohxa but after the fall of communism it was used for various other purposes such as a TV station and a night club. But today there’s nothing inside and it’s only used for tourists to climb up and slide down!

We stumbled across this monastery by accident but were very impressed. It dates back to the 8th century and is built right into the rock face. Set in an incredibly peaceful mountain location where you can literally hear noises miles away. The monastery is open during the day for visitors and there are still monks who live onsite.

Another quirky thing to do in Kosovo is visit the statue of Bill Clinton on the main street. The statue was put there to honour him for his role is helping Kosovo to independence. American presidents seem to be quite popular in the Balkans and in most cities you’ll find a Bill Clinton or George W. Bush street.

The Monuments of Skopje, Macedonia

In a bid to make the city look more appealing in 2014 the government invested a huge amount (€560m) in placing monuments around the city. There are now around 150 different monuments from the 10m high soldier on a horse (rumoured to be Alexander the Great) to the life-size Mother Teresa next to her birthplace. A walk through the city is definitely an interesting one that will have you snapping photos on every corner. My favourite was the statue to the women showing motherhood at different stages.

The first mayor of Tirana after the fall of communism was also an artist. Instead of giving up this job in favour of his new one he decided to incorporate the two. Taking the boring facades of the communist era housing blocks he painted them in bright colours throughout the city. The buildings are still used as housing but the new paint job gives the city a funky vibe and it makes a fun thing to spot on your way through the city.

There are free water taps all over the Balkan cities and they are perfect for filling up your water bottle on the go. But don’t be fooled into doing it in the Bulgarian capital. The water that comes from these springs is warm! In the middle of the city is small square with 20 or so taps all constantly spouting warm mineral water. The water is said to be really good for you and you’ll see crowds of elderly, who can’t afford bottled water, down at the taps filling tanks to take home. I’ve heard it’s a fun game to sit and watch how many tourists go for a drink and get a surprise!

Montenegro is not exactly known as an elitist destination but this tiny island is definitely not for common folk. It is attached to the mainland by a thin strip and is occupied by a luxury hotel starting at €5000 per night! The beach next to the island is divided in two. With one side being for the public and the other side for those willing to pay €100 for an umbrella and a virtually private beach. It’s a beautiful stretch of coast and worth seeing if you’re going past but maybe check out accommodation a little further along the coast!

In 1914 Franz Ferdinand and his wife visited Sarajevo. A series of events led to them driving along the Latin Bridge to be shot by Gavrilo Princip. Because Princip was part of a Serbian nationalist group, Austria-Hungary blamed Serbia for the assassinations and World War One began.

You can still see ‘the bridge where WWI began’ in Sarajevo today. There is a plaque showing where Franz Ferdinand and his wife were shot.

Rohan is a Kiwi travel blogger on a journey from Germany to New Zealand the long way. She just completed the first phase, driving from Germany to Georgia in a van. She blogs about budget travel and books along the way. . Follow Rohan on Facebook and instagram too. 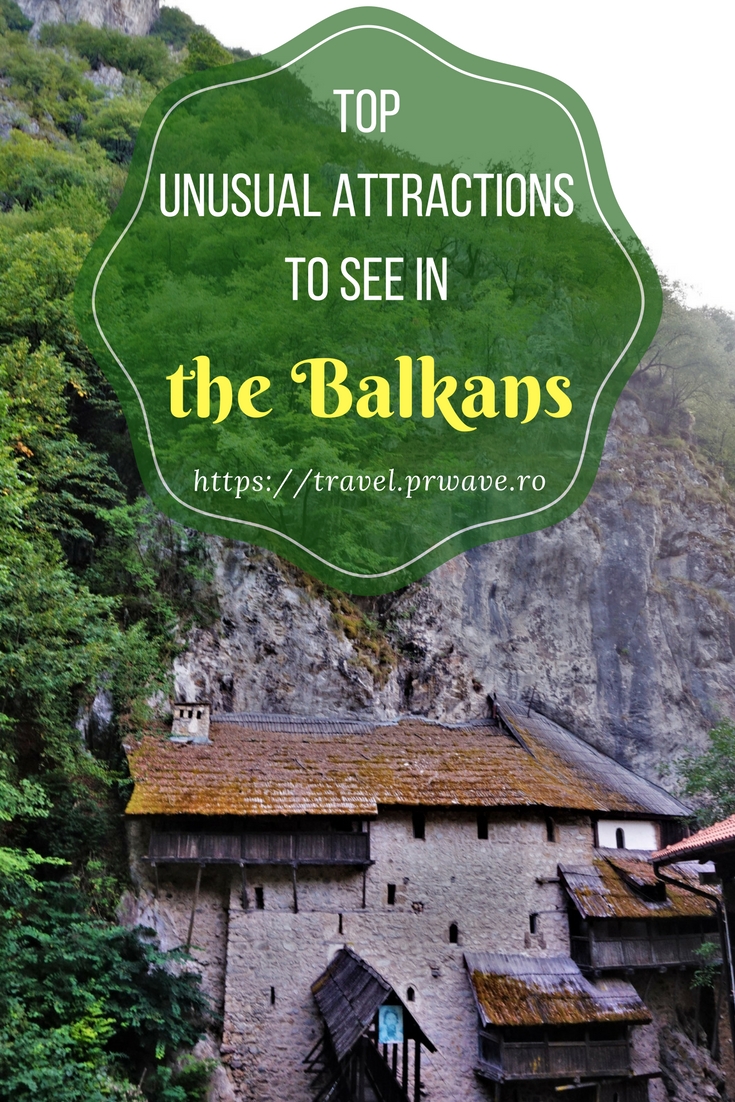 2 thoughts on “Top Quirky Sights to see in the Balkans”