I still remember the first time I have arrived in the enchanted reign of Middle Age cathedrals and legends, all giving me a flavour of immemorial times and Nordic Gods. Flanders is partly on the territory of nowadays Belgium, but more than two thousand years ago it used to cover the North of France and a little part of the Netherlands as well, being inhabited by a Celtic population. In spite of a rich cultural and historical heritage little is known about Flanders, Belgium being mainly associated with Brussels, its capital-city. So, let’s depart in a legendary journey in some other city-gods that do deserve a closer look of those willing to discover the secrets of Europe!

The first city I visited in Belgium is Antwerp, translated as the man throwing hands. The name reminded me of Tyr, the Nordic God of War, who had his hand bitten and removed by a mythical wolf. The very soul of the city can be linked to this God, ever since the Middle Ages it has been the battlefield for many nations: the French, the Dutch, the English or the Spanish, a departure point of riots and bloody punishments, but also of cloth industry. Nowadays only the excellently preserved architecture reminds of its warrior soul, for instance the 19th century fortifications of the citadel that has played a central role in Belgium’s independence. One can say that the contemporary Antwerp is much like a commercial city, being globally reputed for its diamond business and for Meir shopping street. This is a pedestrian area sheltering a wide range of brad stores alternating with houses built by famous architects on the way from the Central Station (a neo-baroque monument itself) to Our Lady’s Cathedral (with works by Rubens). When it comes to art, one can visit Rubens’ house, his tomb in Saint James’ Cathedral and his works displayed at the Museum of Fine Arts along with those of Van Dyck and Titian.

READ  One day trip outside the city - and some funny stuff :D

Next, I pay a visit to Bruges (literally meaning port), believed to be the most beautiful Flemish city and the capital of the West-Flanders province. I cannot help to assimilate its personality to another Nordic God, Baldr the patron of beauty, love and happiness. Bruges is also known as the Venice of the North with its canals and bridges and with its numerous music festivals. Mr. Peene, my professor from Bruges, who has been so kind to make a tour, told me several stories about the city. The most attractive point is definitely the Cathedral of the Holy Blood: every year, on Ascension Day the relic is shown to the crowd of believers during a procession with knight costumes taking place on the streets of the city. Another interesting story is linked to Saint John’s Hospital: people from all over Flanders were queuing in front of it as it was well known for its mental diseases treatments. That is why the people from Bruges make fun of themselves saying they are a little bit crazy. I find Bruges a medieval architectural jewel, with its multiple portals and cathedrals such as the Our Lady’s Cathedral displaying Michelangelo’s only sculpture, Madonna and the Child, Sint Salvador, the church of the city and also several museums of beer and chocolate.

Continue to part 2 of this article

A Guide to Sardinia’s Towns 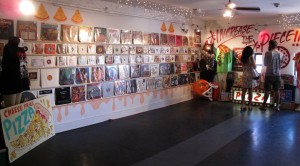