/** * */ Prater, Vienna - the park where you can spend hours and hours having fun - Travel Moments In Time - travel itineraries, travel guides, travel tips and recommendations 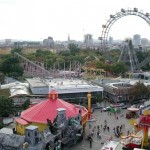 Prater is a big park in Austria’s capital city of Vienna. It is also hosting an amusement park and an attractions for visitors all over the world.

In our last trip to Vienna, I wanted to spend a day – or at least half of it – here. Oh, and I also wanted my husband to shoot some stuff and win me some teddy bears.

And here we were, in Prater (it’s very easy to get there for there is even a subway station as well as a tram one).

OK, now comes the first tip: make sure that it is at least 10:00 AM – for this is the official opening hour (some of the attractions stay open until 1 AM in the morning). The park is open between March 15th and October 31st, this being the official visiting season, and prices for different attraction vary from 1 to 1o Euro. Outside the official season the main Prater park is open – a great place to take a long walk – but the amusements are closed.

When we arrived at Prater it was about 9.30-9.40 AM. Some attractions were in the middle of the opening procedures. However a good salesman is the one that tries to take advantage of every visitor. So… some invited us to play 🙂

My dear husband tried a hit-the-target with a rock game. And he managed to win me the first puppet. Then we went on to further discover Prater’s fun offering… There are several types of attractions:

READ  How to enjoy travel during bad weather

We’ve been in Prater twice.

The first time we tried a few attractions – we had little time to spend here. But it was also the first time I tried a montagne-russe. That was an interesting experience – I was wearing a silk blouse and I had the feeling I was falling from the seat. Yes, i know, theoretically that’s impossible. Wanna bet however?

The second time I had a special mission for my husband. Shoot and win :)) And he managed to win for me, beside the already mention puppet, a tiny plush bear – Hans, and a biiig plush penguin – Wilhelm (called Willy 🙂 ). And I won myself a small tiger – Klaus. Unfortunately that is a moment we did not catch on camera – I was quite a view with my arms full of puppets.

We also tried some car racing on a kart track, Ave raced pretty well (and won the race, I might add :)).

I’m not into adrenaline games – and of course there are still some tempting attractions we did not try.

In Prater you’ll also find 2 gift shops (this is tip number 2) with interesting and funny products – bought some for the family and friends, and, of course, for us.

All in all, Prater is a fun way to spend at least half of a day! And yes, you can also eat there and recharge your batteries for the next adventure!

Top 6 most popular carousels in the world

Nothing to do at the airport – funny video