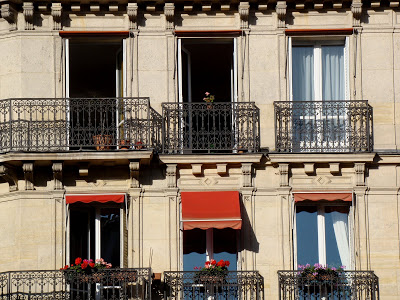 This post will start with a song…like all my mornings. I would suggest you press Play below, and continue reading.

I never wanted to go to Paris and spend my days in museums. Time is too precious and no, we don’t have all the time in the world, I’m afraid…so you will not find descriptions of La Gioconda anywhere in this post.
I wanted to go to Paris and live some days in the spirit of the “trop chic”. Yes, Paris is a fancy city, with beautiful angles and lights caressing buildings, statues, trees and bodies. Especially bodies. There is some sort of French sun that knows exactly where to look to show one the best view onto a beautiful window. And that’s where you need to look too!

This French sun will then warm up the people surrounding the table of a café, as they enjoy their espresso and the croissants. Oh la la …les croissants! It’s all they have told you they would be, and more…Croissant that you need to share with someone you love, otherwise they turn as dull as the ones in an airport. You can also share them with the visiting crumb-collectors, in a terribly amusing negotiation experience, like the one I had..

Paris is an autumn city, I’m sure, I feel it as such…C’est chic, c’est fou, c’est beau…
I’m strolling around the Pantheon and I find myself comparing it to the one in Rome. It has absolutely nothing in common, so I stop comparing and start enjoying. I love the masses of students of all nations coming and going on the streets close to the Pantheon. It makes me feel like this is what I have missed, out of my own free will that chose to fall in love with Rome, rather than Paris, at a certain point in time.
Yes, I’m close to La Sorbonne, and I can touch the white stone that it is made of. It feels as if I could touch the soul of someone I never really knew, but loved all my life. And what a life!

READ  Interesting: Hunting rifle Offered to Nicolae Ceausescu by Her Majesty the Queen and the Duke of Edinburgh

I turn into Boulevard Saint Michel, where I hope to be able to buy that scarf I promised to Panselutz, my friend. The shops are not that fancy, I don’t get impressed by anything except by the unjustifiably expensive price of things made in Bangladesh.

I decide to cross over. Le Petit Pont. You wouldn’t bear with me as I read some “boring historical facts and figures” that should make me feel smart after this visit to Paris….Should I remember any of them, that is…But I most probably will just lock them up in the visual memory I am blessed with and take them out …half past never.
There’s no use in reading “subtitles” in Paris. The bridges, the cathedrals, the Seine are to be lived here and now, not there and then. I close the professional guide I hold in hand and trust that my steps have some sort of intuition of the “must see”.

“Le Petit Pont spans the shortest crossing between Ile de la Cité and Montagne St Geneviève. The structure underneath your feet had been swept away by fire, flood and ice 10 times in history.” Yes, I was reading that, just before I closed a book threatened to be thrown into the Seine…
I can see Notre Dame from here and I will be stopping for a while, as my obsession with its lacy façade needs to get its toll.

A few restless looks and silent reprimands later, I am heading to Quai d’Orleans. The sun that is bathing the quay is almost unreal as it plays with the tree lined banks of the Seine.

At a certain point I turn right…no idea where I am anymore. I simply turned right and found myself underneath an arcade of new an old buildings…I wouldn’t know what they are, so I am tempted to take out a map, but street signeage spares the embarassment of the tourist in me. I am at Les Halles…It feels like a modern Alice in Wonderland paradise…A maze, children’s garden, shops, places to hide, even an imposing St. Eustache Cathedral to complete the contrast of the old and the new…

It’s easy to get out of the maze though…No matter how hard you try, you cannot get lost forever! There is a very clear arrow almost pushing you to the Louvre. (I thought I said no museums!)

Ok, just the palace. From the outside…

Picnic. Jardins des Tuilleries. I am taking a seat and sharing a sandwich with the ducks. I share a piece of sandwich with a kid who also wants to feed the ducks. We’re both such kids! I laugh, he laughs…I get the energy to stand up and look for a Velib bike station. I want to get to that tower I see in the distance…and I want to do it French style. Do get a Velib in Paris!

Pause. The piece of music I suggested in the beginning of this text must have ended by now. I don’t read well without music. I trust neither do most of you. For those who would like to hear what I am listening next, press the Play button below.

I am listening to music, loudly, as I queue for a good 45 minutes on the eastern pier of the Tour Eiffel. Of course I want to go up. Again! I can still hear the Russians behind me comment upon the French in general. I don’t make out much of the conversation, I used to do better once upon a time. The Spanish in front are restless and excited. The Americans in front of the Spanish yell at each other on the topic of a hotel reservation…

READ  5 Sights Not To Be Missed In Edinburgh

Wasn’t this the best place to be romantic????

I hold a hand as I climb up to the first floor of the Tour Eiffel. The best hand I’d ever held.
The view from the peak is the best view I’ve ever had from a tower. The city is lighting up underneath my eyes. This is the best Paris people could have made. The best birthday gift I have ever had. Ah, Paris, Paris!

Diana Stoleru spends most of her time loving what she does. She makes sure that the Romanian software product, BitDefender, gets to be known and distributed across Asia.

One of her passions is traveling and usually she plans things in great detail. At times, however, she’ll be fine letting the unplanned take its course.

Most Amazing Rock Formations in the World