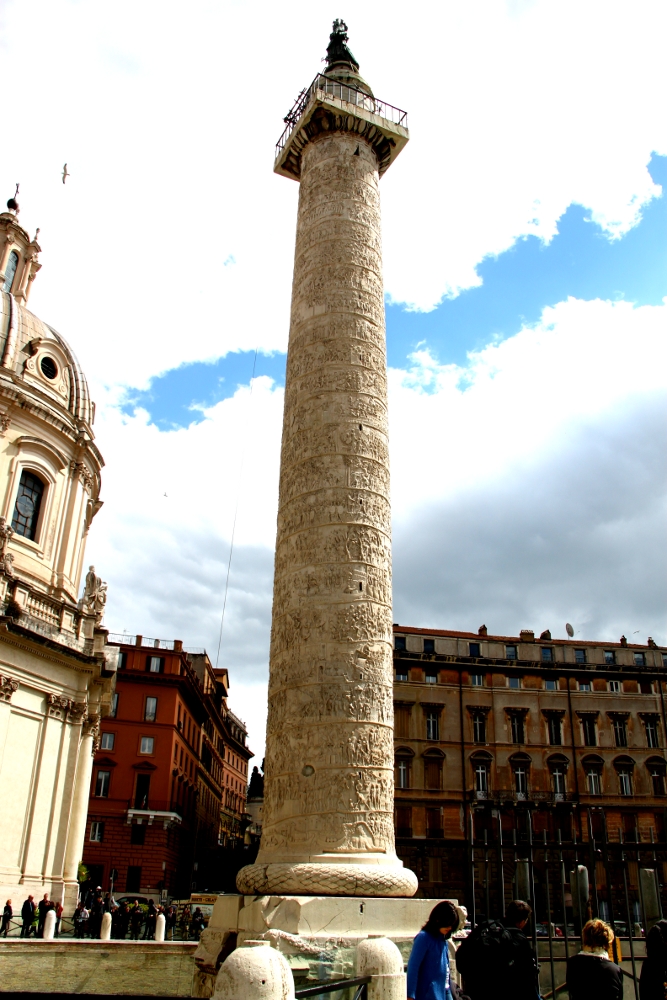 Rome is a city with vestiges from a long time ago. Everyone knows that, but it’s only when you are actually there that you get mesmerized by the ancient buildings. Today I want to present you one of Rome’s landmarks: Trajan’s Column. Erected in 113 AD in honor of Emperor Trajan, this column aimed to praise Trajan’s victories in Dacia (now Romania, my country).

It is believed that the monument’s architect was Apollodorus of Damascus. Including its large pedestal, the monument measures 35 meters in height and it is covered in beautifully carved reliefs winds. A band of more than 180 meters of such carved reliefs can be observed and the interesting thing is that its width varies from 60cm at the bottom to 120cm at the top in order to be easily seen by the people.

These sculptures tell the story of the two Dacian wars – 101-102 and 105-106 AD, starting with the preparation of the army and ending, of course, with the victory of the Roman army. “The column consists of twenty-nine pieces of white marble, the largest one weighing up to seventy-seven tons. The reliefs were not always in plain white: originally they were gilded and, like many ancient Roman monuments, brightly colored.” (source)

According to Wikipedia, “translated, the inscription reads:

The Senate and people of Rome [give or dedicate this] to the emperor Caesar, son of the divine Nerva, Nerva Traianus Augustus Germanicus Dacicus, pontifex maximus, in his 17th year in the office of tribune, having been acclaimed 6 times as imperator, 6 times consul, pater patriae, to demonstrate of what great height the hill [was] and place [that] was removed for such great works.”

The interiour of this column is empty. It was created with a staircase of 185 steps allowing people to go on top and have access to the platform above where people could admire the city’s panorama.

But enough facts, let’s see more photos of the column 😉 I hope you like them! Click on each photo for a larger view!

The Splendid Alps Seen from the Airplane